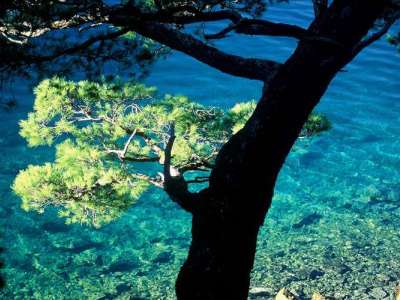 The Croatia's oldest National Park in the Adriatic is located in the northwestern part of the island. The main phenomenons of the Park are salty lakes, which consist of three parts - Big Lake, Small Lake and the Soline channel. The lakes are a unique geological and oceanographic phenomenon of worldwide importance.

The lakes are surrounded with hills, covered with dense vegetation. The trees of beautiful, rich pine forests gently descend all the way to the surface of the lakes, thus creating an image of unspoiled nature.
The path all around the lakes is excellent for walking or cycling, as well as the numerous paths through woods, always in a shadow, so even in a summer it is not too hot to take a trekking route.

The Park is known also for it's rich cultural and historical heritage. The best preserved one is the Benediction monastery and the church of St. Mary on the little island in the middle of the Big Lake, dating from the 12th century. Another important monument is ruins of Roman palace probably from the 2nd century and two basilicas nearby the palace from the early Christian period.

Each of these elements together makes a perfect harmony, which resulted in proclamation of the National Park on 11th November 1960.